A house is an entity and its energy consumption is the result of a combination of several factors. With our monitoring service, you can find out how much energy you are using in your house.

In a house with electric heating, energy is used for the heating of rooms and domestic water and for household electricity. The energy spent on heating is affected by the structures and location of the house, building technology, and consumption habits. At the annual level, consumption is mainly divided as follows: rooms 50%, domestic water 20% and household electricity 30%.

Information is of the essence in electric heating

Teijo Perilä and his wife have lived in their 120 m2 terraced home in Paloheinä for twenty years. Still in 2005, the annual energy consumption of their home, which has electric heating, was approximately 20,000 kilowatt-hours, but last year the consumption was only 11,200 kilowatt-hours.

Perilä’s home was involved in the Elvari programme of Motiva and Suomen Energiateollisuus ry, the purpose of which is to improve the efficiency of energy use in homes heated by electricity. It is one of Helen’s pilot sites, with fifteen fixed electricity meters installed for the monitoring of consumption.

In addition, there are also ten sub-meters plugged into sockets. All electricity meters are read once a month. Information about your own electricity consumption and its structure is important when you start thinking about the measures. “You can get by with fewer meters, though,” Teijo Perilä says. 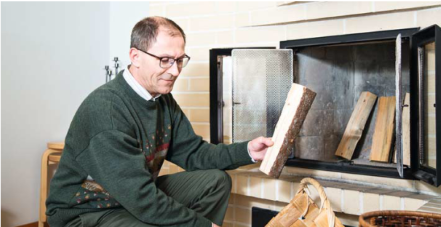 Heat from the ground

The Helsinki home of Tapani Tompuri and his wife was heated with night-time electricity and a heat-storing fireplace for over ten years. The heat-storing electricity heating system was replaced with geothermal heat in 2011.

“We save about a thousand euros a year on the electricity bill – and if we hadn’t previously utilised the fireplace for heating, the saving would be even greater,” calculates Tompuri.

It is true that the initial investment of the pump is high: it cost about 15,000 euros for the Tompuris after tax credit for household expenses. For the geothermal pipes, a well with a diameter of less than twenty centimetres was drilled to the depth of 180 metres by the side of the house. In addition, indoors there is one device with a height of a high cupboard, which includes, e.g. the storage water tank.

Still three years ago, the bathroom of Eero Paananen and his wife had electric underfloor heating switched on night and day. As the bathroom was used only for a short period during the day, the amount of heat and energy wasted was up to a thousand kilowatt-hours per year.

The thermostat was programmed so that it heats the floor only during the times of the day when the bathroom is in use: in the morning and evening. At other times, the thermostat keeps the temperature at a saver setting so that the floor does not feel warm underfoot.

As a result of the programmable thermostat in the bathroom, the saving in the running costs was up to 40 per cent. However, there has been no need to compromise on comfort as the floor is warm whenever the bathroom is used.

“With heating controls, we save just over a hundred euros a year, and therefore the investment was worthwhile. However, what is even more important than the monetary savings is that now there is no need to heat the room unnecessarily,” Eero Paananen says.

Consumption habits play a big part in energy consumption and comfort of living.