A temperate year decreased the demand for district heating 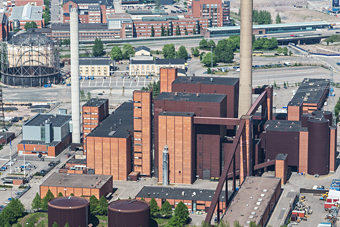 87% of district heating was produced by eco-efficient combined heat and power in the Hanasaari, Salmisaari and Vuosaari power plants.

The warm summer was visible in the district cooling demand in Helsinki: previous production records were exceeded during June, July and August. During this period of three months, 32,000 MWh of surplus heat energy was converted to district heating with the help of district cooling production, and, of this, the estimated share of solar power was 50%. The amount of this heat energy equals the annual consumption of 15,000 new, 80 square metre apartment. 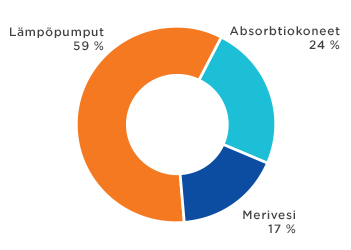 At nights underground energy reserves conserve cooling energy, which can be used during the day time, when there is the highest demand for cooling. The first underground cooling reserve, 11 million litres in volume, was taken into use in Pasila in 2012. A new energy reserve, over three times the size of the one in Pasila, with 25 million litres in volume, was completed, a hundred metres below the Esplanadi park.

District cooling covers the entire Helsinki inner city, and it has expanded into new areas every year, most recently to Jätkäsaari and Kalasatama. In Helsinki, district cooling is used in shopping malls, hotels, office buildings, public premises and data centres, but also, more and more often, in residential buildings.

The production and distribution of district heating and district cooling was of high-quality and reliable during the year. The network was extended to cover new areal construction sites, such as Kalasatama and Jätkäsaari.

The basis for the award was the unique energy system of Helsinki, which combines the production of electricity, district heating and district cooling into an energy-efficient triple-production. Among others, the utilised energy sources include the coolness of sea water, heat from sewage water and the heat energy produced by real estates and data centres. The basis for the triple-production is the combined production of electricity and heat with an efficiency ratio of over 90%.

As the only company in the world, Helsingin Energia has integrated the district cooling into the production in a way that enables the utilisation of, otherwise, unused, wasted energy in the production of district heating and cooling. This is, of a great part, made possible by the heat pump plant that is the largest of its kind and is located in Helsinki, underneath the Katri Vala Park.

Remote reading for all heating customers

At the end of the year, all district heating customers of Helsingin Energia were equipped with a remote reading equipment. This means that all customers can now monitor their energy consumption through Helsingin Energia’s free Sävel Mobiili service, even by hourly bases. Remote reading enables billing that is based on the actual consumption, which has been applied to the district heating customers since the beginning of August.

The price of winter season district heating energy in Helsinki decreased in November, compared to the two previous winter seasons. The most significant factor behind this decrease was the decreased production costs of the energy-efficient co-production used for the district heating production.
Various options for melting snow and for fighting against slippery road conditions in the inner city were researched during the year. The return waters from district heating already keep several street sections clear of snow in the city centre.

In 2012, Helsingin Energia chose the Sakarinmäki school in Östersundom as a test project for the use of production techniques of renewable energy. Heating for the school will be produced with a hybrid solution that includes geothermal heat, solar collectors, storage of energy and a heating plant.

The amount of customers