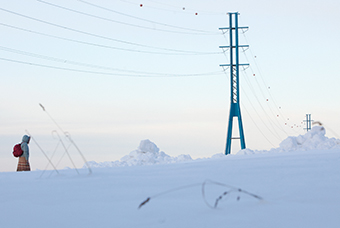 Helen Sähköverkko Oy is responsible for the electricity transmission and distribution services in the Helsinki region. In 2013, its turnover was 117 million euros.

The total energy consumption in the company’s operational area in 2013 was 4,5 TWh, which is 2,3% less than the previous year. There were 738 new connections to the electrical network, and by the end of the year, the total number of connections was 32,629.

Security of electricity supply at a good level

The security of the electricity supply in Helsinki remained at a good level. The average outage experienced by customers was approximately three minutes, which is less than half of the ten-year average.

The enabling factor of the good supply security is the high cabling rate of the grid (98%), thanks to which, storms hardly ever cause any distribution disturbances. Furthermore, the duration of disturbances was cut down by increasing the automation of the grid’s transformers.

The company has launched a major investment programme that promotes the supply security and service level of the grid. The investments of this operating year were 37,5 million euros.

The multi-phased renewal project of the 110 kV cable network in the city centre was completed during 2013. An investment decision was made to secure the electricity supply in the whole inner city through a new, powerful cable connection. The electricity station projects of Viikinmäki and Ilmalantori were launched.The renewal of the grid was continued actively, and the focus point of the new network construction was on the new residential construction areas, primarily Kruunuvuorenranta, Jätkäsaari and Kalasatama.

Smart meters in use

The first year of the more extensive use of smart meters was a success. The customers became used to being invoiced based on the readings, which together with the Sävel Plus service enables an effortless way to monitor the consumption of electricity.

On 1st January 2014, the transmission prices of electricity were lowered by 5%, on average. This is a significant discount, concerning the sizeable increase of 50% in the grid prices during the recent years. This discount was possible thanks to the exceptionally low revenue level of grid operations, due to economic regulation, and more efficient operations and lower economic costs of the company due to the low market interest rate.

The new Electricity Market Act came into force 1 September 2013. The main purpose of the Act is to improve the security of the electricity supply. The Act did not impose any significant new obligations to the company. However, the definition of the grid in the Act was very important to the company. For reasons related to service reliability, the Helsinki inner city grid will require a 400 kV grid transformer in the 2020s. The grid solutions in the capital city area are closely linked to the local 110 kV network structures, which is why the Energy Authority outlines, based on the Act, how the grid should be extended in Helsinki.

Consumption of electricity in Helsinki

Mitox Oy offers energy measuring and reading services for the needs of energy companies and real estate customers. In 2013, its turnover was 21.3 million euros. The installations of remote reading devices for electric grid customers were mainly completed in 2013. In addition, the invoicing meters of the, approximately, 14,000 district heating customers of Helsingin Energia were replaced with meters that enable remote reading by the end of the year.

In 2013, Mitox Oy brought a service called MitoxTase (MitoxBalance) into the market. MitoxTase enables the implementation of the balance statement belonging to the owner of the distribution network as a customised service for the customer network companies.

The development work concerning the MitoxMulti service package was continued.  The application offers the customer even more extensive device and system compatibility and a wider range of energy meters.

The reliability of Mitox Oy remote reading services was proven through an audit implemented by Helen Group. As a whole, it was stated that the service fulfilled the requirements set for it.