The energy-efficiency of outdoor lighting was improved further

The objective of Helsingin Energia, in regard to outdoor lighting, was again to produce high-quality lighting in an even more energy-efficient way. 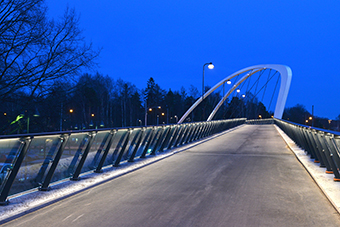 The testing of LED lamps was continued. The traditional suspended light fitting of Helsingin Energia was also equipped with a LED light.

The new, developing LED technology was prepared for by acquiring a city-wide control system, which enables the LED lights to be dimmed during the quiet night hours. LED lights are well-suited to being dimmed, and much better for this purpose than the traditional discharge lamps. All in all, 815 street lamp centres were renewed, 500 for this purpose.

Quick silver lamps will exit from the market in 2015 and will be replaced with more energy-efficient lighting solutions. During a related light changing project, 6,500 lamps were replaced. The project is on schedule: out of the intended 50,000 lights only 18,400 lights are still to be changed.

Since the beginning of the century, the lamp-specific energy consumption has decreased by 25%, from 200 Watts to 150 Watts, and the consumption is still decreasing.

The long-term development work of Helsingin Energia proved successful, when Helsinki was appointed as the host of the 2015 LUCI annual meeting. LUCI (Lighting Urban Community International) is the international association of urban lighting.