We achieved good results in a difficult market situation

The revenue of the Helen Group remained at a good level, even though the economic situation in Europe also affects Finland. The forecasts of the electricity market, price trends of fuels and the cost impacts of the emission trade still include significant uncertainties. 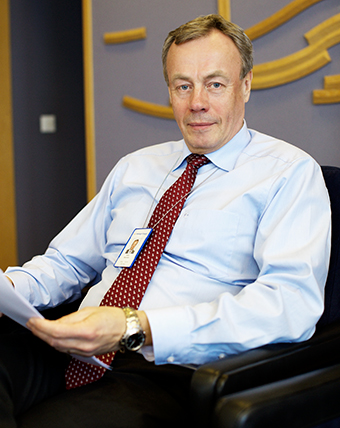 The preparation work for the “Towards Carbon-Neutral Future 2050” development project progressed as planned. Our power plants made the necessary changes, in order to start the use of biomass for mixture fuel and to fulfil the requirements of an IE directive regulating industrial emissions.

Increasing the use of biofuels was reviewed through several projects, some of which are still in preparation. In cooperation with UPM, Metso and PVO-Lämpövoima Oy, we will continue research into the applicability of coal pellets to be used in coal power plants. Together with Gasum and Metsä Fibre, we studied the production and utilisation options of biogas. The bio refinery producing wood-based biogas planned to be constructed to Joutseno could be implemented, both technically and in regard to the environment. However, the financial conditions for the project are not yet met.

We invested less than on average during the last year. Our investments were mostly allocated on standard energy production and district heating operations, as well as the expansion and basic renovations of the tunnel and district cooling network. Starting in 2014, our level of investments will increase strongly, which will impair our economy.

The most significant investment last year was the purchase of hydropower from Sweden. The consortium formed by Helsingin Energia, EPV Energia Oy and Kymppivoima Oy bought a part of one of Sweden’s largest water reserves in Indalsälven.

Wind power ownership was rearranged by giving up the small share of Tunturituuli Oy. In the future, we will follow our development plan and focus on developing winter power through significant projects by Suomen Hyötytuuli Oy and Suomen Merituuli Oy.

The Act on the corporisation of public enterprises and agencies operating in competitive municipal markets came into effect on 1st of September 2013. Based on this, a process for changing the operational model of Helsingin Energia, from a public enterprise into a limited liability company, starting from the beginning of 2015, was launched. Reviews have been made, in regard to the transfer terms of personnel, for example, and other operational arrangements. The preparations for the corporisation will continue, and we except the city council to make the decisions concerning the corporate structure during the spring.

Last year, Helsingin Energia once again received many great awards. Of these, we would like to highlight the honorary mention in “Reputation and responsibility of companies 2013” study and the international environmental award ”Global District Energy Climate Award” for an energy-efficient solution of district heating and cooling. These awards show that we are very invested in developing the whole energy business and, in particular, energy-efficiency. The unique energy system in Helsinki combined the production of electricity, district heating and district cooling into an effective triple-production, during which the efficiency ratio of the plants could be up to 90%.

The Finnish competence was awarded with high grades, as the International Energy Association gave the highest possible grade to the Finnish district heating, district cooling and joint-production systems in a comparison study between different countries. The reviews emphasised the solution in Helsinki, in particular.

We are also very happy that our customer service has been graded highly in many various studies. Our customers are happy with us, and we would like to promote this in the future, as well, by comprehensively developing our products, production and services.

Thank you to the staff

The basis of our success is a competent staff, and I would like to offer them my sincerest thanks. Good professional skills and a varied competence provide us with great conditions for success in a new operational environment, as well.