Many forms of energy from the sun

Increased use of solar energy is a significant part of Helen’s target towards carbon dioxide-neutral energy production. Both electrical and thermal energy are harnessed from the sun.

SOLAR PANELS INDIVIDUALLY OR AT A POWER PLANT 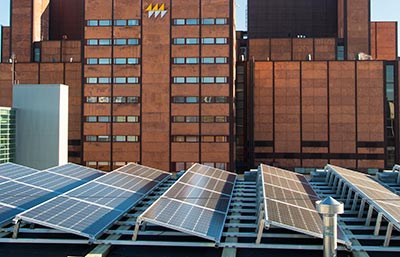 The Suvilahti solar power plant, the largest in Finland, is being built in the Helsinki district of Suvilahti. In connection with other repairs, 1,188 solar panels are installed on the roof of the substation. The plant will be completed for production use in spring 2015.

The solar panels in Suvilahti were sold out in just a few days. Due to their popularity, it was decided to launch the planning work for the next solar power plant with immediate effect.

Helen also sells smaller solar panel packages for households and corporate customers. It is possible to draw up a repurchase agreement on surplus electricity with the electricity vendor.

Helen uses district cooling to gather its customers’ surplus heat for utilisation. District cooling is an essential part of Helsinki’s smart energy system where the waste heat in the summer is recovered, upgraded and reutilised. In summer 2014, over 40,000,000 kWh of surplus thermal energy was recovered for utilisation with district cooling. This amount corresponds to the annual heating need of some 20,000 new 80 m2 apartments.

When energy-efficient construction is combined with district heating and cooling, a property can produce the same or even a higher amount of energy in the summer as it consumes in the winter. In this kind of net-zero energy building, the size of windows and the building services technology are designed for optimal indoor conditions, for example, in terms of light and indoor air.

There is no need for separate solar collectors when waste heat is used for producing renewable solar energy into the district heating system with the aid of district cooling. This subject is studied more closely in the SunZEB project coordinated by Helen, with project partners including VTT, Aalto University, the construction and real estate sector, the Ministry of the Environment, the Ministry of Employment and the Economy, and some other energy companies. Research results will be published during spring 2015.

The hybrid system combines solar, geothermal and bio heat. A good example of this is the Sakarinmäki school in Östersundom.