The Helen Group's results were at the anticipated level, which was higher than in the previous year. The positive profit trend in the network business, the low market price of electricity and the increased fuel costs had a key impact on the performance. Net sales for 2017 totalled EUR 805 million (EUR 782 million) and operating profit stood at EUR 81 million (EUR 75 million). Operating profit accounted for 10.1 per cent of net sales.

The development of energy production focused on the planning of investments in renewable production forms and on the preparation of the decisions to be made to replace heat production in Hanasaari by year 2024.

The options for the first stage are new investments in bio-based heat production, heat pumps and the storage of heat. We are also studying versatile heat pump solutions, electric boilers, geothermal heat, replacing coal with bio-based fuels, distributed microgeneration together with the customers, increasing energy efficiency in customers' operations, and the utilisation of purchased energies and excess heat, e.g. in data centres. Solutions related to the circular economy and the utilisation of excess heat are developed together with the customers to an increasing degree.

The overall price of district heat in Helsinki was about 24 per cent lower than the average price in the country.

District heat sales were at the previous year's level at 6,606 GWh.

The number of district heat connections continued to grow, standing at 15,289. District heat accounts for 90.9 per cent of the heated cubic volume of buildings in Helsinki.

The amount of customers

A total of 6,167 GWh of electricity was sold. This was down by 2 per cent on the previous year.

The market price of electricity remained at a low level.

The spot price trend (Finland's area price) is presented in the graph. 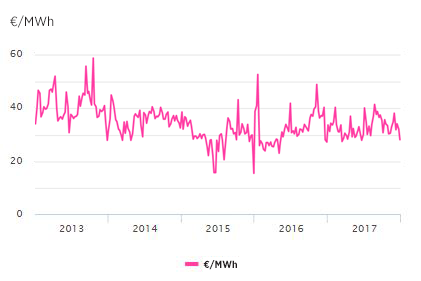 Electricity distribution in Helsinki was at the previous year's level, standing at 4,404 GWh.

Distribution of electricity consumption in Helsinki 2017

Consumption of electricity in Helsinki in total

The reliability of the electricity network in Helsinki is outstanding. An electricity user in Helsinki had, on average, only one power cut lasting three minutes during the year.

Trend in microgeneration of solar power

In 2017, microgeneration of solar power increased considerably on the previous year.

Electricity production for the wholesale market

A total of 6,292 GWh of electricity was produced for the wholesale market in the power plants in Helsinki and through power assets. The share of climate-neutral production forms was 38 per cent of total electricity generation. The share of renewables increased from 15 per cent to 16 per cent.

We produced 7,082 GWh of district heat, which is almost at the same level as in the previous year.

In 2017, the share of energy we produced in mixed combustion of coal and wood pellets increased and, correspondingly, the share of natural gas production decreased. This trend, which started in 2016, is due to changes in the energy market, which have resulted in higher profitability of energy produced from coal.