We were born out of a need to create a safer and more eco-friendly way of producing energy in a smoky city. Today, we are an internationally esteemed developer of the energy industry.

1877 Finland’s first electric lighting trial is carried out at the VR machine shop in Helsinki on 10 December. The city is mainly lit up by gas.

1884 Daniel Johannes Wadén establishes the first electricity company in Helsinki. No extensive and harmonised electricity network is built straight away, but electricity is distributed from substations serving each city block. Overhead power lines criss-cross the town. 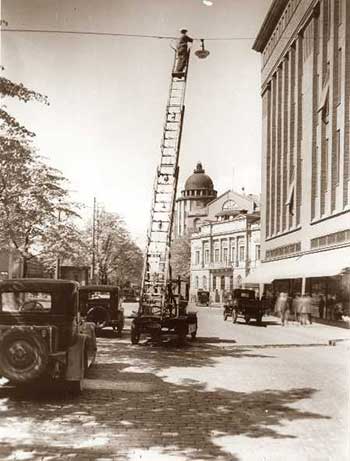 1907 The City Council of Helsinki decides on the building of an electric power plant on the headland of Sörnäinen in the Suvilahti area.

1908 The construction work of the Suvilahti steam power plant starts and lasts for two years. The power plant is Finland’s first building made of reinforced concrete. The elevation drawings of the buildings are drawn by Selim A. Lindqvist. Construction of the electricity network starts.

1908 The chimney stack of Suvilahti is built.

The Suvilahti steam turbine plant starts its operations in July. In the same year, the exhibition of the electricity works is opened in a new administration building at the corner of Pieni Roobertinkatu and Kasarmikatu. It exhibited ‘foot warmers and other heat radiators, irons, coffeepots, lamps, etc. electrical equipment’. These days, the name of our home energy advisory centre is the Energy Gallery.

1911 The Töölö substation is built on the corner of Runeberginkatu and Töölönkatu. Töölö is undergoing a busy construction phase, and electric lights are installed in the new, modern apartment blocks. The Kallio substation is also completed in Kaarlenkatu later in the same year.

1914–1918 The war puts a stop to fuel imports to Finland. Wood is introduced as raw material for energy generation. In 1917, accelerating inflation starts to hamper the operations of power plants. Towards the end of the Civil War, the Executive Committee of the Workers takes on the lead in the operations of the city’s technical plants. As a result, the directors, engineers and office workers of the plants stop working.

1929 The electricity and gas plants compete for customers. Electricity is mainly used for indoor and outdoor lighting while gas is used in homes and in industry. The gasworks campaign strongly for gas cookers in order to prevent electric cookers from taking over the market. Gradually, electric cookers become more common.

1930 Statistics on domestic appliances in Helsinki are drawn up in connection with the population census. The city has, e.g. 18,048 irons and 9,958 vacuum cleaners.

1939–1945 There is a shortage of energy due to the war. The electricity works have to urge citizens to save electricity. Along with the arrival of migrants, the city’s population grows by 20,000-30,000 people and the energy demand is huge. Distribution outages cannot be avoided. 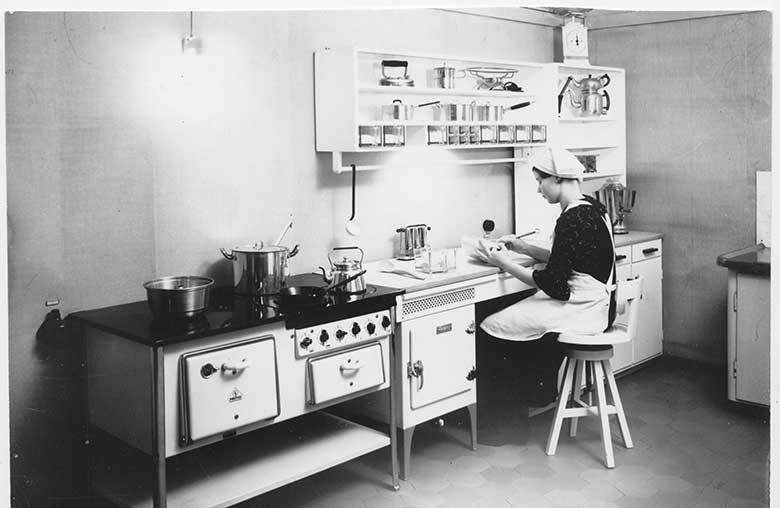 1947–1949 After the war, a new plan for the country's energy supply is drawn up to stop excessive dependence on imported fuels. Areas that had previously produced hydropower have been lost. Electricity distribution and the construction of networks are hampered by a shortage of materials, and electricity has to be rationed.

1953 Salmisaari A power plant in Ruoholahti is commissioned. The plant produces both district heat and electricity.

1960 Hanasaari A power plant is commissioned in the Sörnäinen energy supply area. The power plant was designed by architect Vera Rosendahl who was also involved in the design of the Salmisaari power plant.

1973 Sähkötalo, which is designed by Alvar Aalto, is completed in Kamppi in connection with the substation. Sähkötalo is used as the new administrative building of the electricity works.

1974 Hanasaari B power plant is commissioned to meet the city’s growing energy needs. A couple of years later, the Suvilahti power plant is decommissioned and later refurbished into a storage warehouse and a sports facility for the employees of the energy works. The premises of the gas works are used as an arts centre in the 1980s.

1981 The foundation stone of Salmisaari B power plant is laid.

1991 The natural gas era begins when Vuosaari A power plant starts its operations. The Hanasaari desulphurisation plant is commissioned in the same year.

1995 Helsinki Energy Board becomes a municipal public utility, and its new name is Helsingin Energia. The Electricity Market Act enters into force on 1 June and the sale of electricity is deregulated, first for major companies and in 1998 also for households and small companies.

2007 Hanasaari A power plant in Sörnäinen is demolished. The Society for the Industrial Heritage gives Helsingin Energia an industrial heritage award for the demolition work. According to the society, the documentation related to the power plant demolition was the most extensive recording ever performed in the termination of industrial operations in Finland. The Suvilahti plant reopens as a cultural venue.

2008 European Parliament selects Helsingin Energia as winner of the Regional Awards competition. According to the reasons for selecting Helsingin Energia, the company is a world leader in energy efficiency.

2012 We launch sales of electric vehicle charging points and services related to the production of solar energy. Development of the smart grid and new services is accelerated once the installation of remotely read meters is completed. Test combustion of pellets starts at the Hanasaari power plant.

Helen Ltd in a nutshell

Our presentation video gives an overview of our operations in less than two minutes.

Our business consists primarily of the production of electricity, district heating and cooling, as well as energy distribution and sales.

We take corporate social responsibility into account in the planning, implementation and management of our business operations.