In 2014, the Salmisaari power plant prepared for the start of pellet combustion. The first pellets were burned mixed in with coal at the turn of the year 2014–2015.

– Firing of wood pellets mixed with coal at a ratio of 5–7 per cent will be started at the Salmisaari power plant. When the co-firing starts, 5–7 pellet lorries will be arriving at the power plant every day, says Project Manager Teemu Nieminen.

Other constructions built in the power plant area were the reception building and the conveyors for dosing and feeding the wood pellets into the coal mix before entering the coal mills. Pellet combustion was first tested at the turn of the year 2014–2015.

A similar system will also be built at the Hanasaari power plant to start pellet combustion. The project was granted the permits required for construction in autumn 2014, and the construction work will start in March 2015. The installation will be completed by the end of 2015.

In spring 2014, particulate and gas emissions were studied at the Hanasaari power plant with a method that was the first of its kind in the world. In flue gas and particulate measurements, combustion products from the mixed combustion of pellets and coal were monitored from the furnace all the way to the atmosphere. 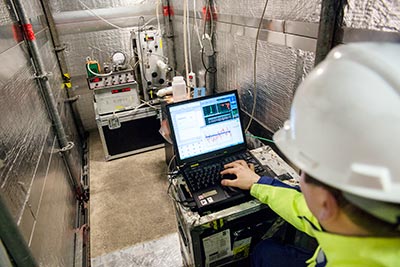 It has already been established in previous tests that, with the current equipment, pellets can replace coal with respect to 5–7 per cent of the boiler’s thermal input.

- Coal pulverisers are not designed for wood pulverisation, and therefore it is not possible to add too many pellets. The pulveriser would not be able to pulverise the coal into as fine a consistency as is necessary for it to burn in the boiler, Teemu Nieminen explains.

- At Salmisaari, we are also testing the ratio of pellets and coal in order to find the optimal solution. With a ratio of 5–7 per cent, a total of some 100,000 tonnes of pellets would be consumed at Salmisaari and Hanasaari each year, Nieminen continues.

The wood pellets to Salmisaari and Hanasaari power plants are delivered by Vapo. The delivery amounts are considerable on the Finnish scale. Wood pellets are manufactured, for example, from the by-products of sawmills, and their burning is defined as carbon neutral.

The pellets supplied by Vapo are of Finnish origin, and they are used for replacing imported coal. Pellets will be delivered to Helsinki from four of Vapo’s plants located in Finland.

The increased use of pellets is part of Helen’s development programme towards a carbon neutral future. Helen aims to reduce greenhouse gas emissions by 20 per cent on the 1990 level and to increase the share of renewable energy to 20 per cent by 2020.

Next year, the Helsinki City Council will decide on the investments pertaining to Helsingin Energia’s development programme. The main alternatives are to increase the share of pellets to 40 per cent at the Hanasaari and Salmisaari power plants or to build a new multifuel power plant at Vuosaari, using wood chips as the main fuel.