Construction of geothermal heating plant under way in Ruskeasuo, Helsinki, drilling of heat well to begin in September

The drilling of Helsinki's first medium-depth geothermal well is set to start in Ruskeasuo at the beginning of September. The Ruskeasuo geothermal plant will serve as Helen's pilot site, where drilling technology and other technical solutions for new geothermal sites are tested and developed. 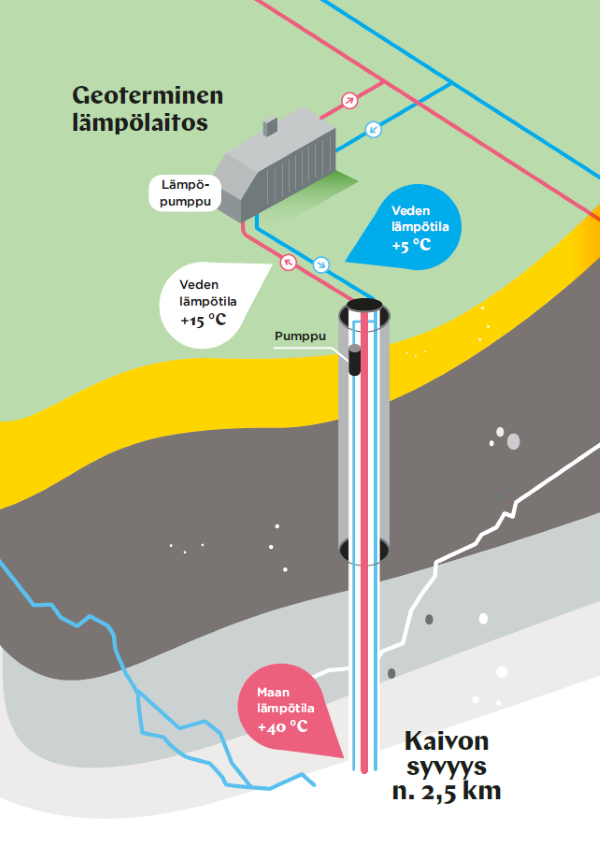 Drilling a 2.5-kilometres-deep heat well is estimated to take about four months, and the plant is likely to take about eight months in all to build. The geothermal plant takes up little space: only a building the size of a shipping container, housing the heat pump, will be visible above ground. The Ruskeasuo geothermal plant will produce 1.8 GWh of carbon-neutral district heat per year, as well as 0.8 GWh of district cooling. The volume corresponds to the heating of about 180 apartment block homes.

"Geothermal heat is an interesting option for carbon-neutral heating. It is very challenging at the drilling stage for reasons related to drilling technology and bedrock type, which is why we have invested in seismic reflection surveying and drilling equipment. We make use of solid Finnish expertise in drilling heat wells because drilling always involves risks," says Sami Mustonen, Head of Project Management at Helen.

Energy from the earth and the sun

One hundred solar panels will be installed around the heat pump plant. Electricity generated by solar power reduces the electricity consumption of the geothermal plant.

Simultaneously with the construction of the first geothermal plant, Helen's research into more extensive utilisation of geothermal heat in Helsinki is making progress. Helen is looking into the possibility of carrying out a unique 3D-seismic reflection survey, never before conducted in Finland in urban conditions.

"Based on the research results and the experience gained from the first geothermal plant, we are planning the next geothermal projects," says the Head of Project Management Sami Mustonen from Helen.

Helen has set the target of carbon neutrality by 2035. The use of coal will be phased out in 2029 at the latest. Helen is currently building new carbon-neutral production in several locations:

In addition, several studies are underway on replacing coal, such as the utilisation of waste heat in the Kilpilahti industrial area, the large-scale utilisation of seawater heat, and the potential of small-scale nuclear power (small modular reactors or SMR).