The public two-way charging point to be installed in Suvilahti is implemented in cooperation between Helen, Liikennevirta and Nissan. So far, there are no known charging points like this in public use anywhere else in Europe.

‘With the V2G charging point, the vehicle’s battery can be used as part of the energy system. In the future, electric vehicles will no longer be a load on the network, but they can be used as part of the electricity network. With two-way charging, the batteries of electric vehicles could be utilised, for example, in disturbances in the electricity network or to prevent any disruptions. Helen is testing the practical operation of V2G at the Suvilahti pilot site,’ says Helen’s Unit Manager Perttu Lahtinen.

‘Our joint project with Helen and Virta is the first step towards a fully integrated ecosystem in electric vehicle use in Finland. The development possibilities in energy management are better than ever before with the merging energy and vehicle sectors, and the future of motoring is becoming electrified at a rapid pace. Nissan sees electric vehicles as more than just a means of transport: the batteries of electric vehicles can also be utilised as mobile energy sources,’ says Nissan’s Zero Emission Strategy Manager Jarkko Ahlbom.

‘There is rapidly growing interest in both the energy and the transport sectors to utilise electric vehicles as part of the energy system. Finland is among the leading countries in the world in electricity network services. The service we have built for Helen is part of the range of international services aimed at Virta’s energy companies,’ says Liikennevirta’s Chief Business Officer Elias Pöyry.

Balancing of production and consumption

In the future, the owner of an electric vehicle can utilise the vehicle’s battery as an energy storage unit at home and also take part in the balancing of the electricity market and gain benefits as part of the service.

EV drivers’ participation in balancing the grid will be important when electric vehicles and, on the other hand, solar and wind power plants will become more common. Therefore, we need batteries of all sizes, i.e. electricity storage units. Control systems that optimise the entities will also be necessary in order to maintain a balance between electricity generation and consumption.

Public charging point will initially be free of charge for users

The Suvilahti charging point is part of the EU’s mySmartLife project. One of the key research, test and product development platforms of the project is the Suvilahti area, which includes a solar power plant, an electricity storage facility and soon also a two-way electric vehicle charging point.

The V2G charging point in Suvilahti will be a public charging station, and in the test phase it will be free of charge for its users. The functionality of V2G will be implemented so that the vehicle battery will be fully charged despite supporting the electricity network. In the initial stage, the V2G charging point will be suitable for Nissan electric vehicles.

The project has received funding from the European Union’s Horizon 2020 research and innovation programme in accordance with grant agreement No. 731297. 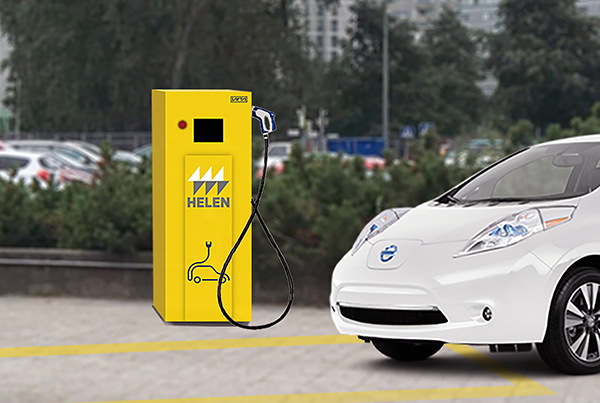 An artist’s impression of the  V2G charging point.