Helen and Skanska are investigating the possibility of building a gigantic seasonal storage facility for heat energy in the old rock caverns located beneath Kruunuvuori in Helsinki. There are reportedly no other similar solutions implemented anywhere else in the world. 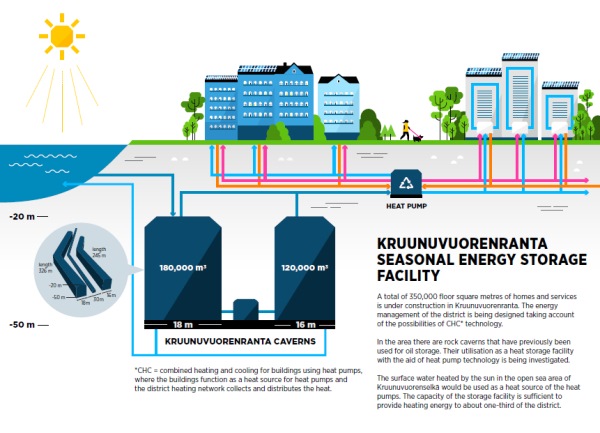 The seasonal energy storage solution is being outlined as part of the energy system of an ecological district with a new way of utilising sea water heated by the sun and the recycled heat of residential buildings. The envisaged project will utilise the rock caverns located beneath Kruunuvuori, one of which has previously been used as an oil stockpile. The total capacity of the caverns is 300,000 m3 and they are located about 50 metres below sea level.

The energy solution designed by Helen is based on a model where heat pumps are used for the heating and cooling of buildings. In summer, the caverns will be filled with surface water heated by the sun and collected from Kruunuvuorenselkä, and in the winter this water is utilised as the energy source for heat pumps. In the summer season, surplus solar heat from buildings is also collected for processing and recycling for the use of the residents. Therefore, in the model, the sea water and buildings heated by the sun function as a source of heat for the heat pumps, and heat is collected and distributed in the heating networks in the district.

”Seasonal storage of energy is one of our key solutions of the future when we are reducing emissions and increasing the use of renewable energy. This project takes a significant step towards an emission-free energy future while increasing living comfort in an ecological way,” says Director Marko Riipinen of Helen.

”In accordance with its new urban strategy, Helsinki emphasises climate responsibility and ecological values, e.g. by acquiring new energy systems and increasing the use of renewable energy. The potential seasonal storage facility for heat energy in Kruunuvuorenranta is an excellent major regional example of this,” adds Pirjo Sirén, director of the Kruunuvuorenranta project in the City of Helsinki.

Kruunuvuorenranta to be an ecological residential seaside district

The planning of the new north-west side of the Kruununvuorenranta residential area, i.e. the planning area of Skanska, is underway. About 600 new homes, ranging from studio flats to family homes, will be built in the planning area of Skanska Kodit, and construction is estimated to start in 2019. The city planning department of the City of Helsinki and Skanska held a planning competition for the town plan of the district, and the plan designed by Anttinen Oiva Arkkitehdit Oy was selected as a basis for follow-on work.

In terms of its implementation, the designed solution is unique both in Finland and on a global scale.

Seasonal storage of energy is an essential method of reducing the amount of energy produced by incineration in the Nordic conditions. In Helsinki, heat demand in the winter season is ten times higher than in the summer season. In the planned solution, water in the open sea area of Kruunuvuori heated in the summer will be stored in gigantic rock caverns, and in the winter season the heat of the sea water is utilised as a source of heat.

Skanska took ownership of the caverns in 2014. In the course of history, various uses were developed for the caverns, such as a car park, shooting range, funeral chapel, and a rock climbing centre. However, these plans were abandoned due to the difficult accessibility of the caverns.