Helen's Munkkisaari heating plant will get a fresh look this summer, when the old green roof is turned into a verdant meadow. The bright vegetation will delight local residents and passers-by, as well as improving the diversity of city nature: the meadow will contain a mixture of species that will also attract pollinating insects.

"Helen is visible in many ways in the Helsinki cityscape. We want to join forces with city residents and experts in order to make the urban environment more pleasant. The Meadow Roof project will create an ecosystem of high biodiversity on the roof of the Munkkisaari heating plant. We are welcoming the pollinating insects to it!" says Head of Unit Juhani Aaltonen from Helen.

The green roof, entirely reserved for nature, is about 800 square metres in area, and anyone can admire the growing meadow from behind a fence. The aim of the Meadow Roof project is to increase natural diversity and bring pleasure to passers-by. It also continues the drive, begun previously with the Punavuori Pollination Station installation, to turn various under-used spaces into part of the green infrastructure under the Green Infra concept.

The Meadow Roof project is implemented jointly with Design Studio RaivioBumann and the University of Jyväskylä project Fading Nature.

"A meadow is an easy way of improving the biodiversity of even a small area, it is easy to look after and visually rich," says biologist Anna Oldén from the Fading Nature project of the University of Jyväskylä.

The overall plan and production of the project are the responsibility of designer Päivi Raivio from Design Studio RaivioBumann. In addition to Ms Oldén, Fading Nature researchers Beñat Olascoaga and Clara Lizarazo are members of the Meadow Roof working group. As well as improving the cityscape, the group's objectives in planning the project have been the sharing of information on plants and resident participation in planning the meadow.

As the guiding principle of the Meadow Roof project is collaboration, local people were also involved in planning the meadow. The 3–5-year-olds' group of the nearby Day Care Eira took part in a pollinator-themed art workshop, and the children selected the corncockle and the corn marigold for the meadow's first summer's flowers. At the end of April, the preparation work of the meadow had reached the stage where the flowers chosen by the children and the meadow plant mixture curated by the researchers were sown.

"The meadow may spring many surprises, as it will be affected by things like weather conditions and its windy location. Now we are monitoring the situation and watering the meadow as necessary, like if the early summer turns out very dry. If all goes according to plan, we will see the first blooms in late summer. Then the children of Day Care Eira will also be able to admire the meadow," says Oldén. 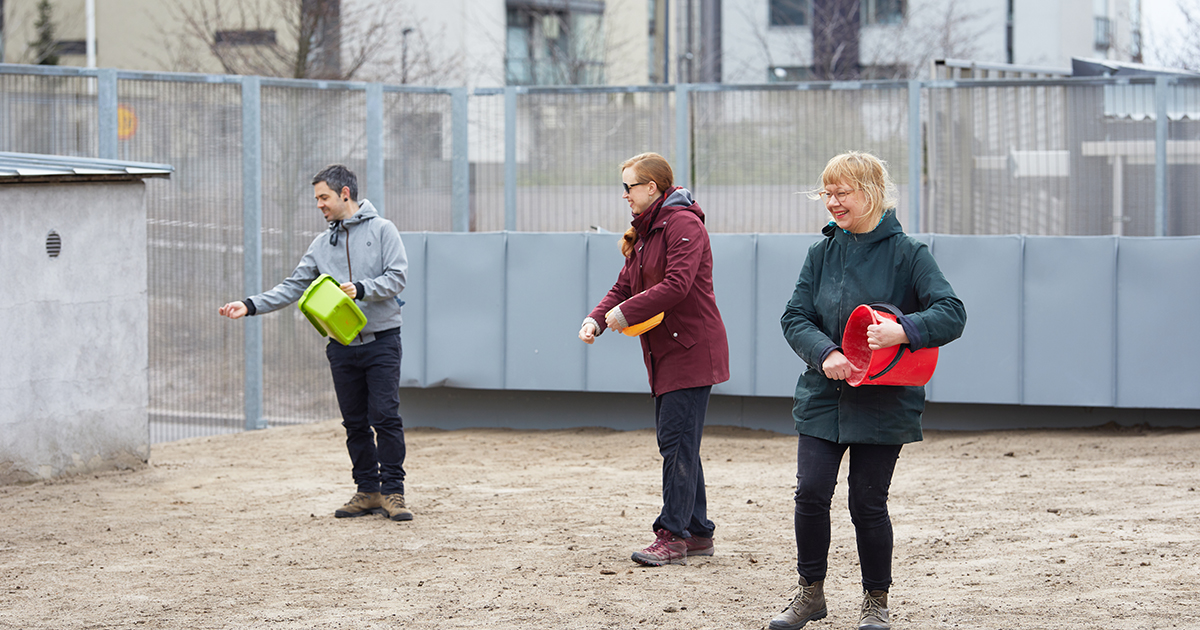 The flower seeds chosen by the children and the meadow plant mixture curated by the researchers were sown at the roof of Munkkisaari heating plant at the end of April. Picture: Researcher Beñat Olascoaga (on the left), biologist Anna Oldén and designer Päivi Raivio.