Helen organised a working party afternoon for its personnel on the river Mätäjoki to help the brown trout, which is under extreme threat. Helen employees were able to play a concrete role in improving the condition of the trout's breeding grounds. 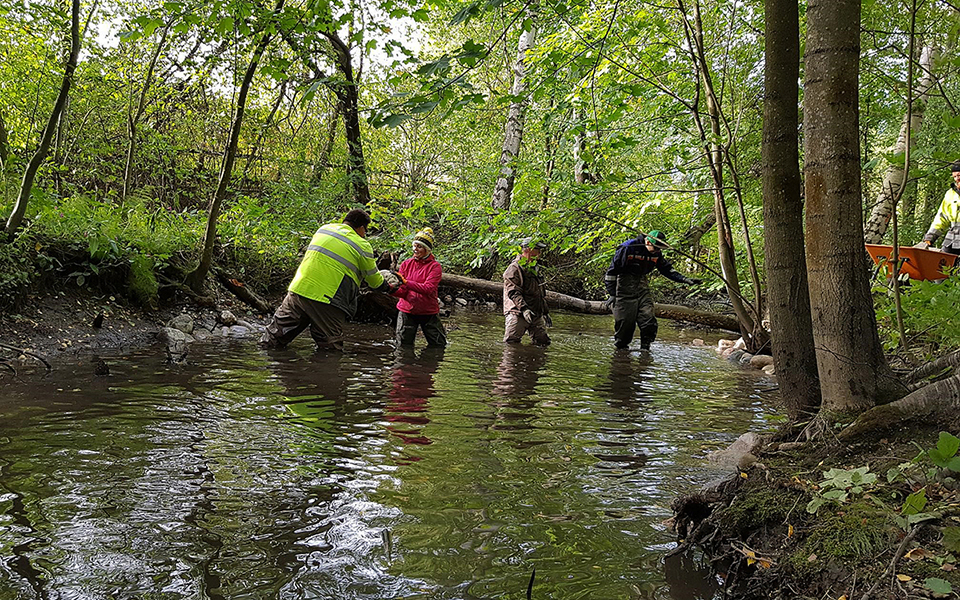 The working party took place in the afternoon of 27 September and comprised about twenty Helen employees. The party improved the trout's spawning ground, took steps to protect the river bed from flow erosion and cleaned up the environment.

The brown trout is classified equally threatened as the Saimaa ringed seal and in great danger of vanishing from Finnish nature.

"The movement and breeding of the fish can be improved in many ways and on many levels. Helen is currently investigating the possibility of the fish to traverse the Ahvenkoski rapids, and the City authority is looking into lowering the eastern branch of the Vanhankaupunginkoski rapids and improving the conditions for their ascent. In the meantime, the brown trout working party gave all interested persons the opportunity of taking their own concrete action to improve the chances of threatened brown trout breeding in Mätäjoki," says Vice President Maiju Westergren of Helen.

The work continues on Saturday 29 September, when the Helsinki Fly Fishing Club is organising an open voluntary working party to help the brown trout on Mätäjoki at Tali.

The Helsinki Fly Fishing Club is working on Mätäjoki for the brown trout. The work has already brought results. Last autumn, the first brown trout born in the river spawned in its fast-flowing sections. This year, a lot of young fish born from last autumn's spawning were found in the river rapids and fast-flowing parts. The project is being carried out in close cooperation with Virtavesien hoitoyhdistys [association caring for streams and rivers] and the City of Helsinki.

"Brown trout spawn in late autumn in fast-flowing parts of rivers and streams. The female trout digs a hole in the gravel and lays her eggs in it. Several males usually participate in the spawning. The eggs are hatched in the gravel through the winter, and in the spring a new generation of trout is born," says Helen's Maintenance Manager Pekka Lindblad, who is active in the Helsinki Fly Fishing Club in his free time.