The project concerning the future energy storage facility in Kruunuvuorenranta has been launched, and preparatory construction works have started in the area. In the joint venture of Helen and Skanska, a large-scale seasonal energy storage facility will be built in the rock caverns of Kruunuvuori, enabling regional and ecological energy production in Skanska’s new residential area. 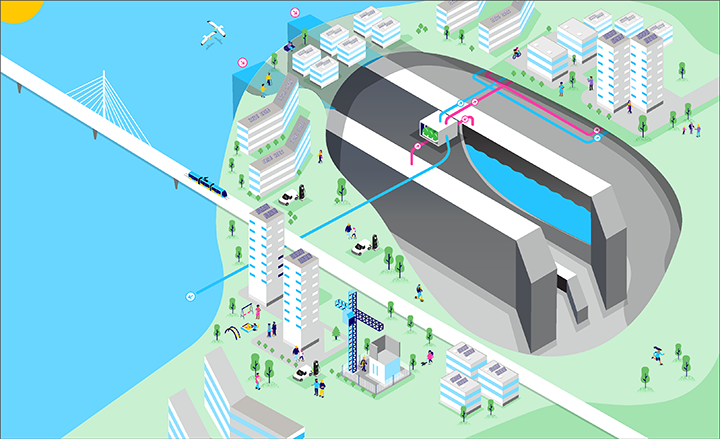 Seasonal energy storage is an important part of the energy system in the new district with a new way of utilising sea water heated by the sun and the recycled heat of residential buildings. In the project, rock caverns located beneath Kruunuvuori will be utilised. These caverns have previously been used as oil storage by Shell. The total capacity of the caverns is 300,000 cubic metres, and they are located approximately 50 metres below sea level.

In summer, the caverns are filled with surface water heated by the sun and collected from Kruunuvuorenselkä, and in the winter season this water is utilised as an energy source for heat pumps. In the summer season, surplus solar heat from buildings is also collected for processing and recycling for the use of the residents.

“The Kruunuvuori energy storage facility is a unique project both in Finland and on an international scale. It supports Helen’s journey towards carbon-neutral energy production and a distributed energy system where heat is produced from energy that is recovered from the ground, air, water, and waste heat. Seasonal storage of energy is a new way to respond to the changing situation where balancing of heat supply and demand between summer and winter will take an increasingly important role,” says Juhani Aaltonen, Head of Sustainable Energy Solutions at Helen.

As a result of the energy storage facility, the carbon footprint of the residential district covered by it will be practically zero during its life cycle. The capacity of the storage facility will be sufficient to meet up to one-third of the heating energy demand of the new residential district of Kruunuvuori. The caverns will primarily provide heat for Skanska’s new residential properties, but there will also be enough energy in the winter for heating other buildings in the surrounding areas. The project receives financial support from Helen's Environmental Penny to implement environmental technical solutions and energy support from The Ministry of Economic Affairs and Employment.

There are two rock caverns in Kruunuvuori: one is approximately 18 metres wide and the other approximately 16 metres wide. Both caverns are approximately 30 metres high. The length of the larger cavern is 326 metres and that of the smaller one is 245 metres. The bottom of the caverns is 50 metres below sea level, and their total volume is around 300,000 cubic metres, i.e. 300 million litres. The volume corresponds to the size of about three parliament houses.

The oil company Shell built the caverns in the early 1970s for use as an oil storage facility, and they have also been utilised as an emergency stockpile of oil products by the National Emergency Supply Agency. The caverns were cleared out for the first time in 2007 and cleaned in 2008–2009. After that, the caverns were used for the second time, and they were then cleared out and cleaned again in 2010–2011.

A new district in the heart of the city

The first homes in the Skanska district of Kruunuvuori located in the North-Western part of the Kruunuvuorenranta housing district are already under construction and scheduled for completion in 2023–2024. The area will include approximately 600 new dwellings ranging from studio apartments to spacious family homes.

The district will be among the most prominent maritime facades in Helsinki. It will be completed by 2030, offering homes to about 13,000 residents. It is also estimated that the district will generate approximately 800 new jobs.

Helen and Fortum are looking into potential SMR cooperation 25.11.2022
Helen receives official approval from the Science Based Targets initiative for its emissions reduction targets 17.11.2022
Helen Group’s interim report January–September 2022: Continued investments and product portfolio revision in a turbulent operating environment 28.10.2022
New technologies play a key role in the energy transition 17.10.2022
Our customer service is closed on Wednesdays in October 27.09.2022
Exchange Electricity customers have reduced their energy consumption significantly 23.09.2022
Significant increase in costs impacts the price of district heat – announcement of prices until next spring provides transparency 31.08.2022
Helen and Elisa to heat homes in Helsinki with waste heat from a data centre 10.08.2022
Consumers are interested in monitoring their own energy usage – use of Oma Helen service growing strongly 09.08.2022
Helen Group’s half-year interim report January–June 2022: Successful adaptation in a challenging operating environment 29.07.2022
See all news